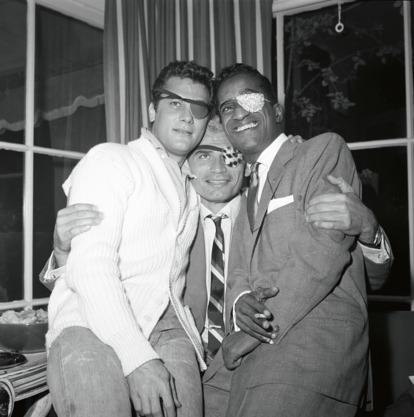 Tony Curtis, Jeff Chandler and Sammy backstage at one of the famed 1955 comeback shows, after Sammy's automobile accident in 1954.

Bernie Abramson, a native of Los Angeles, served in the U.S. Navy as an aerial cameraman during World War II.  He shot the first images of the Japanese fleet at the island of Palau, and his aerial photos resulted in the sinking of more than fifty ships and the destruction of one hundred and fifty aircraft, for which he received numerous decorations. His plane was shot down in 1945 and he spent two and a half days in the water before being rescued by the USS Bowers.

After his recovery and discharge, he pursued a photographic career back home, operating a photo lab on Fairfax Ave.  One fortunate day, a woman entered the store in error, seeking to have some photographic work done by a competing store.  Abramson took the job and wound up working regularly for the customer, who, it turned out, was an important Hollywood publicist.

That same woman later hired Abramson to take some shots when her usual photographer was indisposed, and soon Abramson was doing as much shooting as he was developing.  Among his customers was Sammy Davis Jr., who hired him to photograph some private parties.  Soon afterward, Frank Sinatra asked Sammy who took his photos; Sammy answered, “Bernie Abramson,” and Frank asked, “Can you trust him?”  When Sammy said, “Yes,” Frank began regularly hiring Bernie as his own personal photographer for family events, parties and so forth.  (“You never had to discuss money with Frank,” Abramson recalled.  “He was beyond generous.”)

After several years of working for Frank, Abramson was recommended to John Kennedy, who had him shoot various family events in the White House.  After Kennedy was murdered, his brother Robert commissioned Abramson to compile a family album for the Kennedy Presidential Library.