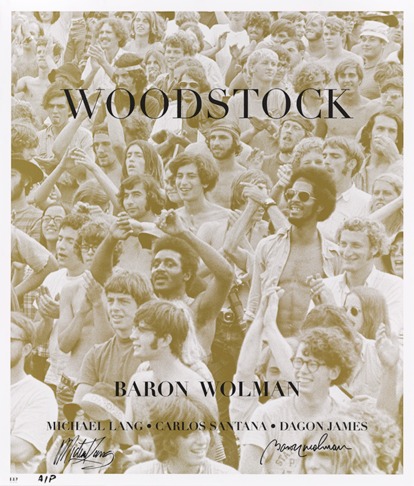 “Woodstock showed the world how things could have been and for this reason it’s important that we never forget this experience, this place, this time, this dream that came true, if only for three days…”

Baron Wolman was Rolling Stone magazine’s first photographer. He went on to capture the 1960s pop rock explosion with artists like Janis Joplin, the Rolling Stones, the Who, Jimi Hendrix, Pink Floyd, and Bob Dylan amongst many more.

In 1969, Wolman attended what would become the most famous music festival of all time. He captured the experience and atmosphere of Woodstock like no other. More interested in the crowd than the performers, Wolman’s acclaimed photographs are hugely evocative and offer an insight into this legendary event that is rarely seen.

This numbered, signed poster is a limited edition of 100 and features one of Wolman’s most captivating crowd shots, expressing the spirit of half a million people, united in a message of peace, love, openness and cultural expression.

This limited edition print of 100 has been produced following the acclaimed release of Reel Art Press’s coffee table volume, Woodstock. The poster features the book’s cover image in a large 32 x 27 inch format, with a gold finish. It is signed by Baron Wolman, and Woodstock co-creator, Michael Lang.

“Here are 500,000 people all together shaking off the shackles of what conservative society expected of them.”

Wolman’s focus on the crowd was unique and remains hugely significant. Tales of Woodstock on and around the stage abound, but little has been said about the community of people, like a tribal gathering, who attended. As Wolman describes it: “What was happening at Woodstock was very much the culmination of everything that had happened in the ‘60s up to that point, and it was miraculous, almost as if I was walking around in a dream. I had never seen anything like it.”