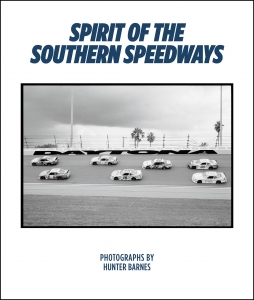 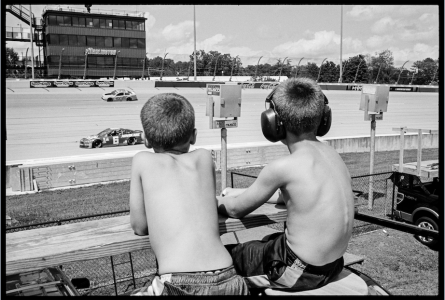 Spirit of the Southern Speedways sees documentarian Hunter Barnes turn his singular attention to the world of NASCAR (National Association for Stock Car Auto Racing). Invited to go on the road with Chip Ganassi Racing over a period of four months, Barnes was given extraordinary access to NASCAR culture. In order to capture the heart of the sport he fully immersed himself into the racing community; the drivers, teams and the crowds. Spending time in the parking lot with fans for a week before each race to fully experience the spirit of NASCAR, he met and photographed the die-hard fans and many of the sport’s most influential figures, while exploring its origins - moonshiners who built cars to outrun the revenuers.

Barnes was struck by the immense sense of community at the gatherings and the feeling of occasion and passion. Families camping out, grandparents with their grandchildren, couples who had followed NASCAR for decades and who truly embrace the spirit of the sport. It was this world, the people, the life he saw beyond the track, that Hunter was compelled to capture for the first time. Barnes also reveals the intimate relationship and connection between the fans and the drivers.

Featuring over 60 images shot in 2017 at some of the sport’s biggest tracks in Daytona Florida, Bristol Tennessee, Darlington South Carolina, Charlotte North Carolina, North Wilksboro North Carolina and Talladega Alabama, Barnes’s subjects include ‘The King’ Richard Petty, the iconic Junior Johnson (who has won 50 races as a driver and 139 as an owner), Jack Roush, owner of Roush Fenway Racing team, and famed driver Dale Earnhardt, Jr.

This 128-page hardback is a unique photographic essay of racing culture and offers an insider’s look at NASCAR by one of the notable documentary photographers working in America today.

THIS LISTING IS FOR A LIMITED SIGNED EDITION, AVAILABLE WHILE STOCKS LAST. THIS EDITION IS SIGNED BY HUNTER BARNES